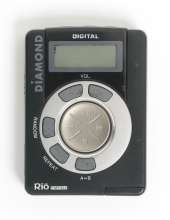 The Rio PMP300 was the first portable consumer MP3 music player, and was produced by Diamond Multimedia. It shipped in 1998 and not without controversy.

Roughly the shape of a deck of cards (3.5 inches by 2.5 inches and 0.625 inches thick) it was black and had an LCD screen and a circular pad with control buttons. It had controls for skipping tracks forwards or backwards, repeat, random play and for four preset equalizer settings. The LCD displayed the track number being played, but did not display artist or title information. It could play MP2 and MP3 format audio files, and had support for a variety of bit-rates and had MP3 variable-bitrate (VBR) support.

It shipped with 32 Mbytes of internal memory and had a SmartMedia slot, allowing users to add additional memory (up to another 32Mbytes - larger cards are not recognized by the Rio's firmware). It was powered by a single AA battery which provided between 8 and 12 hours of playback time. Connection to a personal computer was through the computer's parallel port, with a proprietary connector on the Rio's edge.

The Rio retailed for US $200, which made it quite expensive for the ability to play a dozen or so songs. An even more expensive version was later released, and was colored translucent green and equipped with a larger 64 Mbyte internal memory, though all of this came at a higher cost of $250.

Diamond no longer provides support for the Rio, and Diamond's Rio software doesn't work on later versions of Microsoft Windows, particularly Windows XP. Consequently owners wanting to keep their Rio working use independently produced freeware programs such as "Dreaming of Brasil" to download audio files to the player. Similarly, limited Linux command-line based support for the Rio is provided by the rioutils package.

In October 1998, the American recording industry group, the Recording Industry Association of America, filed a lawsuit in the Ninth U.S. Court of Appeals in San Francisco claiming the player violated the 1992 Audio Home Recording Act. The three judge panel ruled in favor of Diamond, paving the way for the development of the MP3 portable player market.

As discussed in the From CD to Rio section, making music for Rio memory and MP3 quality are related.  The higher the quality you want, the higher the bitrate needed. This leads to more data storage, and memory requirements. For the Rio player, the amount of memory is equivalent to audio playback time. With Rio, you can intermix files created at different data rates. Intermix the data rates to get the best audio performance for a given piece or type of music. Most pop music will sound very good at 64Kbit MP3 encoding rates.

The Rio’s internal memory is 32Mb, files at the 64Kbps data rate.  Below is a table of data rates, memory usage and times.

As can be seen the lower the bitrate (Kbps), the greater the playing time that can be stored in the Rio player. In general, if quality is not of major importance, use a lower bit rate.

All other trademarks, logos and brand names shown on this website other than Stated are the sole property of their respective companies and are not owned by oemdrivers.com. Information on the oemdrivers.com may not be duplicated without permission. oemdrivers.com is not responsible for any damages or losses that may arise from incorrect driver installation. Only install drivers if you are qualified to do so.