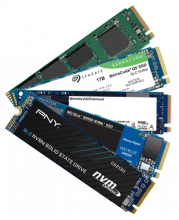 For storage devices that are attached to the PCIe and M.2 slots a driver is required to fully utilize parallel speed and enhanced queuing technology. All latest versions of Windows already have these drivers included with the exception of Windows 7 & Windows Server 2008R2. These are downloads that can be accessed below. Samsung (and other brands) NAND M.2 Drives do have a separate NVMe driver packages for all operating systems, We haven't found information that suggests that there is a advantage using Samsung's NVMe drivers.

Installing the hotfix on Windows 7 will only let you see an additional NVMe drive, to install Windows 7 on a new NVMe drive, you will need to create new installation media with the hotfix already applied. This is not outlined here, rather read the documentation link below by Microsoft.

DON'T INSTALL ON PRODUCTION SYSTEM OR SERVER, the hotfixes are no long supported by Microsoft, use at you OWN RISK.