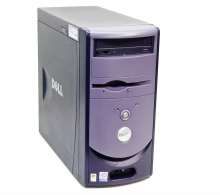 Dell Dimension was a line of home desktop computers manufactured by Dell Inc. As of June 26, 2007, Dell replaced the low-end Dimension with the Inspiron line of desktop computers, later offering higher-end consumer machines under the Studio line in 2008. The Dimension is now sold for the business and non-American markets. However, the high-end Dimension 9200 and 9200c (XPS 410 and XPS 210 in the American market) is still being manufactured. The E520/1 and their "C" models no longer exist, and are now part of the Inspiron line, which was previously only a laptop line, under the names Inspiron 530/1 (S) with a new case design.