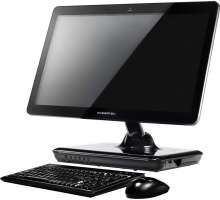 Averatec's All-in-One D1130EA1E-1 desktop computers are not sold anymore, this series (D1100) which was released with Windows XP Home Edition installed. The Drivers are below, if you want install a later Operating System such as Windows 10, You will need to have more RAM installed.

The Averatec All-in-One computers are very slow, and really need to stay on the operating system that they were shipped with. Linux is another option if you really need a modern operating system.  The CPU is an Intel Atom so performance is not expected.

All other trademarks, logos and brand names shown on this website other than Stated are the sole property of their respective companies and are not owned by oemdrivers.com. Information on the oemdrivers.com may not be duplicated without permission. oemdrivers.com is not responsible for any damages or losses that may arise from incorrect driver installation. Only install drivers if you are qualified to do so.