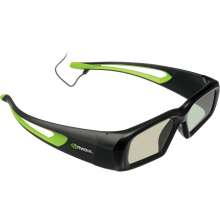 3D Vision (previously GeForce 3D Vision) is a stereoscopic gaming kit from Nvidia which consists of LC shutter glasses and driver software which enables stereoscopic vision for any Direct3D game, with various degrees of compatibility. There have been many examples of shutter glasses over the past decade, but the NVIDIA 3D Vision gaming kit introduced in 2008 introduced this technology to mainstream consumers and PC gamers.

The Drivers page or what is left of it on Nvidia's site is here: https://www.nvidia.com/en-in/drivers/GeForce-3D-Drivers-Downloads/

The kit is specially designed for 120 Hz LCD monitors. Also it is compatible with late CRT monitors (some of which may work at 1024×768×120 Hz and even higher refresh rates), DLP-projectors, and other. It requires a graphics card from Nvidia.

The glasses use wireless IR protocol and can be charged from a USB cable, allowing around 60 hours of continuous use.

The wireless emitter connects to the USB port and interfaces with the underlying driver software. It also contains a VESA Stereo port for connecting supported DLP TV sets, although standalone operation without a PC with installed Nvidia 3D Vision driver is not allowed.

The stereo driver software can perform automatic stereoscopic conversion by using the 3D models submitted by the application and rendering two stereoscopic views instead of the standard mono view. The automatic driver works in two modes: fully "automatic" mode, where 3D Vision driver controls screen depth (convergence) and stereo separation, and "explicit" mode, where control over screen depth, separation, and textures is performed by the game developer with the use of proprietary NVAPI.

The quad-buffered mode allows developers to control the rendering, avoiding the automatic mode of the driver and just presenting the rendered stereo picture to left and right frame buffers with associated back buffers.