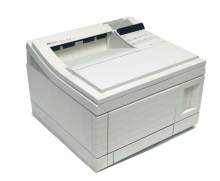 The HP LaserJet 4 (abbreviated sometimes to LJ4 or HP4) is a group of monochrome laser printers produced in the early to mid-1990s as part of the LaserJet series by Hewlett Packard (HP). The 4 series has various different models, including the standard LaserJet 4 for business use, the 4L for personal use and the 4P for small businesses. Additional models included the 4Si model, created as a heavy-duty business printer, and the 4V model, a B-size printer for desktop publishing and graphic artists. There are also Apple Macintosh specific variants of these machines with the '4M' designation. Hewlett Packard also released an upgraded version of the LaserJet 4/4M known as the 4 Plus ('4+')/4M Plus ('4M+').

The LaserJet 4, especially the 4/4M/4+/4M+ models, have become known for their durability, mainly due to their reliable construction, as well as the printers built-in PCL (and optional PostScript) printer language support which is still used in computers to this day. Hewlett Packard dominated the laser printing sector during this time in part due to their reliability, relatively affordable pricing, as well as the spread of LaserJet 4 models from personal use up to heavy business use.

The LaserJet 4 series has now been discontinued, and Hewlett Packard themselves have recommended the HP LaserJet 4250 as a replacement for the 4/4M/4+/4M+ models. However the driver for the HP LaserJet 4 is in even wider use than the actual hardware since it can solve some tricky software problems with printing. The driver is very standard and can be used with old software with success, even when applied to other makes and models of printers.

The EX(and EX+) print engine is known for its reliability and longevity, and in comparison to earlier generations of laser printers, these machines have acquired a 'workhorse' reputation. The engine has a high monthly duty cycle (20,000 pages) and it is not uncommon to find units still functioning well after a million or more page impressions. However, any printer mechanism is subject to wear and degeneration, and typically these printers still in use have now seen long service (the machine being discontinued with the introduction of the Laserjet 5 in 1996). A common problem with these printers is wear or degeneration of the feed rollers after long use. This leads to increasingly frequent paper jams. Several retailers sell repair kits with replacement rollers.

Printers that exhibit the "accordion" or "washboard" paper jam problem with the paper tightly concertina'd or folded in the exit paper path (often behind the rear access door) generally have problems with the paper exit mechanism. In many cases, the delivery rollers (upper and lower) in the upper or final stage of the paper exit are worn or unserviceable. Replacement kits for these rollers are easily obtainable and can solve the problem.