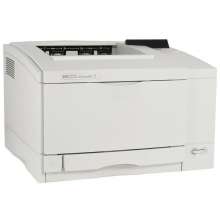 The LaserJet 5/5N/5M can unofficially support 32MB 72pin SIMM modules (with presence detect), allowing a maximum 128MB of memory to be installed. This is twice the official capacity of 66MB. Use of the PostScript module will reduce the total maximum memory to 100MB due to the fact that the PostScript module takes up a memory slot and has only 4MB of RAM.

The LaserJet 5P can unofficially support 32MB 72pin SIMM modules with parity (24 chip modules tested), allowing a maximum 98MB of memory to be installed. This is nearly twice the official capacity of 50MB. Powering up the machine with additional installed 96MB takes 59 seconds due to the extended memory test.

The LaserJet 5Si comes without a network adaptor, but an expansion slot is provided, and the firmware supports network printing. If an added network card can not be enabled, reset the printer to default factory settings - to do this, power off the printer, press and hold the online button and switch on the printer. Allow the printer to fully boot, then release the button. The printer is now reset to factory defaults, and the network configuration should now work.