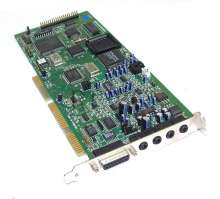 Sound Blaster AWE32 is an ISA sound card from Creative Technology. It is an add-on board for PCs. The AWE32, introduced in March 1994, was a nearly full-length ISA card, measuring 14 inches (356 mm) in length. It needed to be this large because of the number of features included (the most available at the time). At the time, manufacturing technology was incapable of integrating all of the functions into a smaller number of chips.

The AWE32 included two distinct audio sections; one being the Creative digital audio section with their audio codec and optional CSP/ASP chip socket, and the second being the E-mu MIDI synthesizer section. The synthesizer section consisted of the EMU8000 synthesizer and the EMU8011 effects processor chip, 1 MiB sample ROM, and a variable amount of RAM (none on the SB32, 512 kiB on the AWE32; RAM was expandable to 28 MiB on both cards). These chips comprised a powerful and flexible sample-based synthesis system, based on E-mu's high-end sampler systems such as the E-mu Emulator III and E-mu Proteus. The effects processor generated various effects (i.e. reverb and chorus) and environments on MIDI output, similar to the later EAX standard on Live! and newer cards. It can also add effects to the output from the Yamaha OPL-3's FM synthesis. The AWE32 was the first sampler to support E-Mu's SoundFont standard, which allowed users to build custom sound sets using their own samples, the samples included in ROM, or both. The card included software for building custom SoundFonts. All of Creative's subsequent cards, other than the Sound Blaster PCI64/128 series, support SoundFonts.

On the initial release, Creative promoted the EMU8000 as a waveguide physical modelling synthesis engine, due to its ability to work with delay lines. The option was used mostly as an effect engine for chorus and flanging effects. Actual physical modeling instruments were not popular on the AWE, although some support exists in the SoundFont format.

The AWE32 didn't use its MPU-401 port to access the EMU8000—Creative decided to expose the EMU8000's registers directly, through three sets of non-standard ports, and interpret MIDI commands in software on the host CPU. As with the Gravis Ultrasound, software designers had to write special AWE32 support into their programs. To support older software, the AWE32 featured OPL-3 FM synthesis, and came with the AWEUTIL program which attempted to provide GM/MT-32/GS redirection to the native AWE hardware; however, AWEUTIL wasn't compatible with all programs or motherboards due to its use of the non-maskable interrupt (a featured that was omitted or disabled on many clone boards), and it used a lot of precious DOS conventional memory. Also, if a game used DOS 32-bit protected mode through a non-DPMI compliant DOS extender, then the MPU-401 emulation would not function and the EMU8000 would not be used unless directly supported by the software. This also affected the Creative Wave Blaster daughterboard header. AWE32's usage in Windows was simplified by the fact that Windows 3.1x had drivers which made the OPL3 and the EMU8000 appear like any another MIDI peripheral, on their own MIDI interfaces.

The Creative digital audio section was basically an entire Sound Blaster 16, and as such, was mostly compatible with Creative's earlier sound cards, including Sound Blaster Pro, Sound Blaster 2.0, and the original Sound Blaster. Its specifications included 16-bit 44.1 kHz AD/DA conversion with real-time on-board compression / decompression and the Yamaha OPL3 FM synthesizer chip. The AWE32 in general has superior recording and playback characteristics compared to the older SB16. However, compatibility was not always perfect and there were situations where various bugs could arise in games. Many of the AWE32 cards had codecs which supported bass, treble, and gain adjustments through Creative's included mixer software. There were many variants and revisions of the AWE32, however, and not all of them use the same digital audio chipset and features do vary. For example, the AWE32 boards that utilize the Vibra chip do not have bass and treble adjustments, but usually noticeably better signal-to-noise ratio.

Also on AWE32 was a Panasonic/Sony/Mitsumi CD-ROM interface (for accessing old, non-ATAPI CD-ROM drives which were still in use at the time), the Wave Blaster header, and two 30-pin SIMM slots for adding sample memory. Later AWE32 revisions replaced the proprietary CD-ROM interfaces with the newer ATAPI interface. The AWE32 supported up to 28 MB of additional SIMM memory; 32 MB could be added to the board, but the synthesizer couldn't address all of it (4MB of the EMU8000's address space was reserved for sample ROM).

AWE32 was criticized for its rather noisy analog output. Static, hiss, and pops were not uncommon from the circuitry onboard these cards. AWE32's name also confused many consumers initially because many believed the number 32 in the name to refer to its sampling bit depth, as in offering 32-bit audio support, when in reality the value 32 represented the polyphony of its MIDI synthesizers (30 sampled voices + the 2 channel mix of the FM synthesizer).

The Sound Blaster 32 (SB32) was a value-oriented offering from Creative, announced on June 6, 1995, designed to fit below the AWE32 Value in the lineup. The SB32 lacked onboard RAM, the Wave Blaster header, and the CSP socket. The boards also used the Vibra digital audio chip which lacked adjustments for bass, treble, and gain. The SB32 had the same MIDI capabilities as the AWE32, and had the same 30-pin SIMM RAM expansion capability. The board was also fully compatible with the AWE32 option in software and used the same Windows drivers. Once the SB32 was outfitted with 30-pin SIMMs, its sampler section performed identically to the AWE32's. Some Sound Blaster 32 PnP with onboard 512kB RAM was sold as AWE32 OEM in Dell computers.