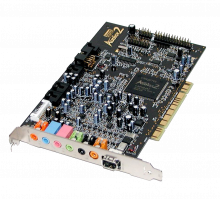 The Sound Blaster Audigy 2 (SB0240) (September 2002) featured an updated EMU10K2 processor called CA0102 to gain access to CA0151 which is a separate chip. Collectively CA0102, CA0151 was sometimes referred to as EMU10K2.5 (The CA0102 chip alone is just a version of Emu10k2). To address the biggest shortcoming of the original Audigy, a revised DMA engine allowed end-to-end high-resolution (24-bit) audio playback: 96 kHz 6.1 channel recording, and 192 kHz stereo. However, the high-resolution audio was achieved by bypassing the DSP, being decoded directly by CA0151 chip also known as "p16v" to take advantage of which Creative substituted CA0102 for the old CA0100 used in Audigy 1. Using the DSP with high-resolution audiostreams resulted in the Audigy's characteristic downsampling (to the DSP's native-rate of 48 kHz), for mixing with other audio sources.

Use of Windows Vista or 7 should mitigate the DSP sample rate conversion issue as setting the card to 16-bit/48 kHz resamples audio using the much superior 32-bit float Windows audio stack before sending it to the card. It is unclear whether this works for all use cases (e.g. OpenAL).

The Audigy 2 supported up to 6.1 speakers and had improved signal-to-noise ratio (SNR) over the Audigy (106 vs. 100 decibels (A)). Audio output was supplied by the AC'97 codec on the front outputs and I²S on the rear. It also featured built-in Dolby Digital 5.1 EX decoding for improved DVD play-back. An IEEE-1394 (FireWire) connector was present in all modifications except Value.

Audigy 2's 3D audio capabilities received a boost when compared to its predecessors. Creative created the EAX 4.0 ADVANCED HD standard to coincide with Audigy 2's release. The chip again can process up to 64 DirectSound3D audio channels in hardware. It also has native support for the free and open source OpenAL audio API.