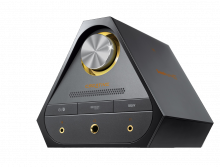 Drivers are not required for Windows 10 and Windows 11, earlier versions of Windows may require drivers in order to operate correctly, this is confirmed with Windows Vista.

If you open the driver files below with 7zip (right click open with) you can see that there is a Driver for Windows Vista in this path:

If you were to manually install the driver that would be the path to take.

Settings are also saved into the X7 after changes are made with the Sound Blaster X7 Control app.

It is Creative’s first USB audio device that supports stereo passive speakers. Like the Sound Blaster ZxR, it allows its Op-Amps to be swapped. The device does not have an encoder but can decode Dolby Digital 5.1 signals.