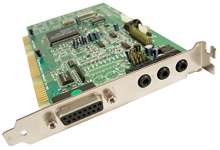 Sound Blaster 16 (June 1992), the successor to Sound Blaster Pro, introduced 16-bit digital audio sampling to the Sound Blaster line. They also, like the older Sound Blasters, natively supported FM synthesis through a Yamaha OPL-3 chip. The cards also featured a connector for add-on daughterboards with wavetable synthesis (actually, sample-based synthesis) capabilities complying to the General MIDI standard. Creative offered such daughterboards in their Wave Blaster line. Finally, the MIDI support now included MPU-401 emulation (in dumb UART mode only, but this was sufficient for most MIDI applications). The Wave Blaster was simply a MIDI peripheral internally connected to the MIDI port, so any PC sequencer software could use it.

The Sound Blaster 16 had a socket for an optional digital signal processor dubbed the Advanced Signal Processor (ASP or later CSP). This chip added some special functionality to SB16, such as speech synthesis through the TextAssist software, QSound audio spatialization technology on wave playback, and special general audio compression and decompression. The chip was quite unpopular, mainly due to the near-complete lack of industry support. The ASP chip needed to be directly programmed for or it did absolutely nothing. AWE32 often had the socket as well, but that was the end of the ASP after that.

Drivers for early Operating Systems are easy to install, you may have to make sure there are no conflicts with other hardware but other than that it is straight forward. Installation makes modifications to the config.sys and autoexec.bat files to automate driver loading upon boot into DOS and later Windows GUI. If you are using a simulator such as DOSBOX then drivers may not be necessary at all as emulation of Sound Blaster (Original) and Sound Blaster 16 are implemented.